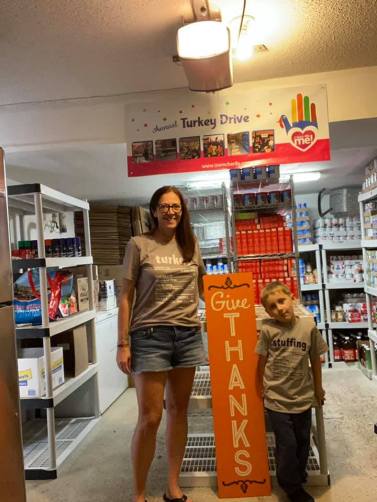 Melanie McKinnon has always had a passion for bringing people together, community work and fundraising for charitable causes. In 1998, the events started getting more creative and on a larger scale when she started participating in the Avon 3-Day Breast Cancer Walks (click here to read more). In order to meet the walks fundraising requirements Ms. McKinnon started organizing events to raise donations for the walks. Over the next three years Ms. McKinnon raised over $8,000 by hosting parties and horseshoe tournaments all to benefit breast cancer.

In 2006, Ms. McKinnon’s sister was diagnosed with Multiple Sclerosis, and in the same month lost her home to a fire. Friends and family rallied to support Katie and the McKinnon family in their time of need. After witnessing the support friends and even strangers showed her family, Ms. McKinnon’s passion for helping others only increased. Since, that time, Ms. McKinnon has been organizing and actively participating in a multitude of charitable endeavors. In doing so, Ms. McKinnon’s goal has been to generate awareness, and inspire others to give back to the community. Since 2006, Ms. McKinnon has hosted an annual Thanksgiving turkey drive, with the last one in 2021 providing 661 local thanksgiving meals to families and veterans in need, as well as over 100 boxes of food to shelters, pantries and veterans. Over the past few years Ms. McKinnon has collected over 200 dresses, shoes and accessories and donated them to Salem High School to be distributed to female students who lack the financial resources to buy a prom dress. In 2010, Ms. McKinnon started the “The Jason Bones Leblanc Memorial Scholarship.” The $1,000 Scholarship created in memory of a dear friend is awarded on an annual basis to a Salem High School senior demonstrating financial need, scholastic or vocational potential, characteristics of personal integrity, and service to the community. As well as organized a fundraiser, which raised over $12,000 to benefit children with Rett Syndrome and organized a team to run in a race for veterans returning from war which raised over $5,600. Additionally, in 2011 Ms. McKinnon organized a bowling tournament in which the proceeds of $8,000 were donated to benefit multiple sclerosis research. Ms. McKinnon’s passion to assist with the needs in the community is endless.

In recognition of many of these efforts, in April of 2010, the Salem News named Ms. McKinnon to the North Shore 100, the newspaper’s annual magazine highlighting local leaders, businesspeople and volunteers making a difference in their communities.

In order to continue to carry out her mission and have a greater impact, in March of 2011, Ms. McKinnon incorporated It Starts With ME! as a Massachusetts non-profit corporation.